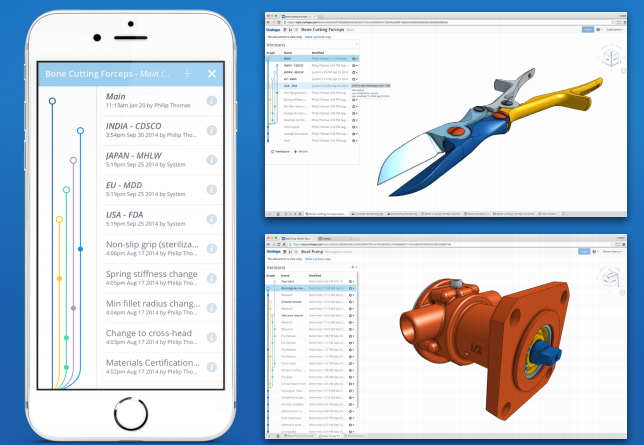 Concerns about CAD in the cloud.

If you believe blogs and industry publications from the past half decade the idea of running CAD software in the cloud is Terrifying, Difficult, and generally resisted by most engineers and CAD managers. And yet others are predicting that cloud services are the future.

The disparity in responses comes as you consider who is posing the question and what their use cases are. The push back is often that the risk of security breaches to the cloud and cost of maintenance do not offset the benefits.

Some applications, like simple sheet metal designs for small manufacturers, simply do not require the computing power gained by moving applications to a cloud service. In other applications, high complexity and multiple variation simulations for example, the resource gains open up new possibilities for optimization and design.

One other area of push back may simply be stubbornness. The benefit of easy collaboration is lost on engineers and designers who already have a workflow. Despite the need for security, and access to great sharing tools, too often CAD files are still shared over email.

All of these concerns aside, most major software providers are finding some way to leverage the benefits of the cloud.

Autodesk has the A360 platform, which is primarily a file management systems that also contains some great collaboration tools for design reviews. Full editing of data is done elsewhere but the dead simple viewer allows anyone to jump into a part or assembly and quickly give feedback. Driving of the review process can also be passed seamlessly between viewers that makes it easy to point out exactly what feature is being discussed and saves a lot of headache on conference calls.

In addition to A360 the Inventor Optimzation suite of tools by Autodesk is also cloud based. The goal of moving to the cloud is to “move past simple validation of parts to their optimization”, according to this ASME article.

Onshape is backed by a mountain of capital, reportedly $80M, and is run by the same team that launched Solidworks a few decades ago. In browser editing two major benefits. First it makes version tracking and file management much easier, no check-ins or check-outs required. Second it eliminates the need for high end hardware, though I have yet to get Onshape running on a $50 Raspberry Pi.

The hardware constraints open up mobile opportunities. Back in May they claimed 1 in 6 sessions was on mobile. Citing evidence of features used (Extrudes and New Sketches) is a bit suspect though. Those two features are exactly what you would expect of someone kicking the tires of a novelty. I would be more impressed if equation driven surfaces or even modifications like dimension changes showed up.

The business model of Onshape is also a strong differentiator since they run like other SaaS cloud services that charge monthly fees. Normally the knock on this is that your data is locked unless you pay the vendor, but with other CAD providers charging annual subscription fees in the thousands the monthly charge is easier to stomach (and they make a point that it is easier on accounting too)

SimScale, who is closely partnered with OnShape also helps to push this SaaS business model. Simulation tools are traditionally more niche than mechanical CAD systems but also tend to be more resource intensive. Threaded processing of multiple simulations is one area where the cloud will really have an advantage and for anyone who has gone to lunch, or even bed, waiting for a simulation to complete the power of accessing cloud servers should be obvious.

According to Engineering.com simulations are one area of CAD that is becoming more mainstream. Even so they question if the ease of use of such powerful tools is ultimately “a good thing“.

Dassault Systemes (Solidworks & Catia V6) seems to have a love/hate relationship with the cloud. While Catia V6 was one of the first major brand pushes to the cloud the user base of Solidworks often pushes back. A few years ago at Solidworks there was a noticeable grumble interlaced with applause anytime the word “cloud” was mentioned.

The bigger point here is that the existing PLM systems and workflows carry with them significant technical debt. Couple that with the security concerns of not controlling the data, a bit issue for a number of large defense, aerospace, and manufacturing, and the pain of transitioning to the cloud has put off many.

GrabCAD offers a different take on the cloud by opening up file management and document sharing via a web based platform. Their WorkBench product is designed for collaboration while their community platform also serves as a repository for designs.

It is not the same as working in the cloud, but a shared access platform for designs does leverage a broader network of resources to make designing easier. Even so many other places exist for simple part libraries.

More Links for CAD in the Cloud:

Resistance to Cloud based CAD

Siemens Solidedge and Cloud based data and license management

IndiaCAD works on the speed of cloud adoption for CAD

2 thoughts on “CAD In The Cloud”