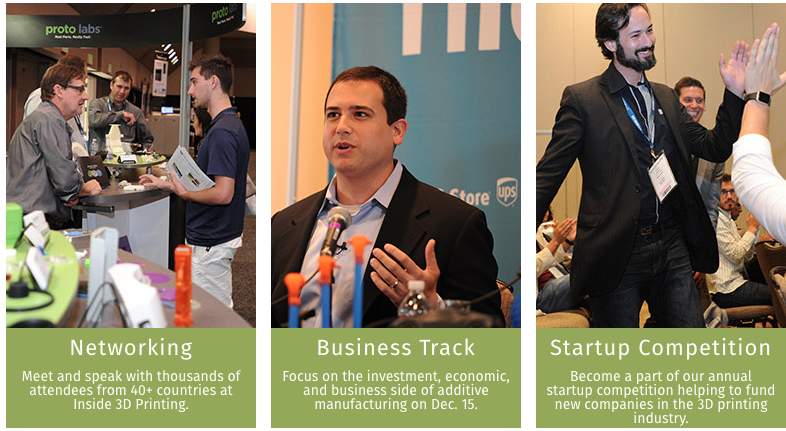 These days 3D printing is everywhere. Even though the technology has not made it into the average home, as anticipated by ambitious futurists like The Smithsonian, it has reached it’s way into medicine, construction, and consumer products. Next month the adopters and innovators within the additive manufacturing space will gather in sunny San Diego at the Inside 3D Printing Expo.

Now in it’s fourth year, the Expo draws a crowd that includes a who’s who in the world of 3D printing. A few of the attendees and speakers at the event include:

Terry Wohlers, who has been producing what can only be called THE 3d printing market report for the last 20 years.

Hod Lipson, a professor at Cornell who is heading up a number of fun projects including food printing and who authored the popular “Fabricated: The New World of 3D Printing“.

Tyler Benester, partner at Asimov Ventures a VC fund that invests primarily in additive manufacturing technology companies and those taking advantage of the tech.

Mark Trageser, operator of Kram-Co which specializes in prototyping and design services that unlocks the power of 3D printing.

Conor MacCormack, CEO and co-founder of Mcor Technologies who produce a 3d printer that uses standard paper to build up layers.

The conference, which is organized by Rising Media, is chaired by Tyler Benester of Asimov. In a press release he noted excitement for the event stating

“We have some surprises in store at Inside 3D Printing San Diego, as several companies emerge from stealth mode to unveil ground-breaking new technology, while other established presenters discuss best practices for emerging business models.”

In addition the event will include a competition for the best design that blurs the lines between nature and human creation. Similar to the Biomimicry theme of the SolidThinking Conference, put on by Altair a few months ago, the competition asks the bold question “Can an object be explicitly designed and fabricated by humans that seems to be naturally”. Thanks to advances in printing technology the answer may soon be yes.

Registration for the event is still available but goes up closer to the event. Get your registration here.