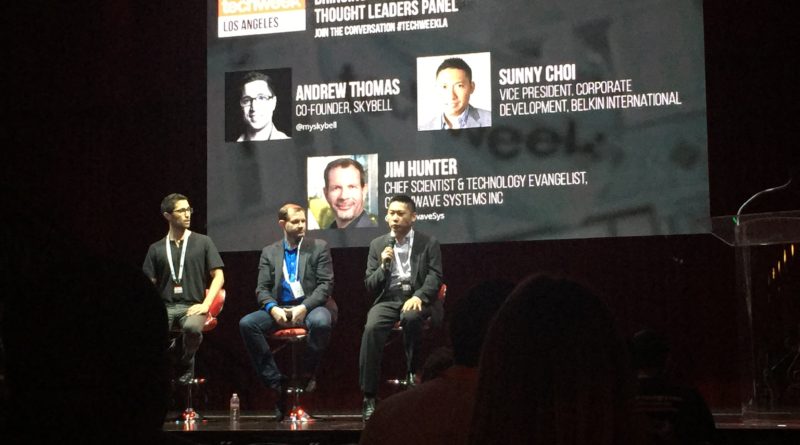 Thanks to the team at Make In LA, the popular hardware accelerator in the San Fernando Valley, I had the opportunity to attend TechWeekLA. The event spanned a variety of topics, including everything from the new mobility and car culture, to the importance of AR and VR. Given the sprawling nature of Los Angeles and the fact that it is known as a media and entertainment giant these and other topics were highly relevant.

Of the panels that I attended there were a number of great speaker. Particularly intriguing was the IoT panel, hosted and moderated by one of the founders of SkyBell. Skybell is a connected doorbell that launched on IndieGoGo a few years ago and now competes with Ring to ensure that your front door is safe and monitored against everything from theft to missed packages.

Also on the IoT panel was Sunny Choi, VP of Corporate Development at Belkin. They of course make the WeMo line of connected home devices, along with a number of Linksys devices that compete with the TP-Link smart plug reviewed here previously. Sunny is pitched a lot of ideas, for investment and potential acquisition, and laid out what he described as “table stakes” for up and coming IoT and connected home devices:

Is it already out there? Connected thermostats are there, so unless your device revolutionizes this, simply bringing it online is no longer compelling.

Is the solution solving, or inventing, a problem? Sunny pointed out that Belkin themselves made the mistake of shooting for the latter when they launched a connected coffee pot. In retrospect he’s “not sure why”, but noted that the company was experimenting in a new space. Sometimes that is the cost of innovation.

Is there a PROFITABILITY plan? He made a point to contrast this against a REVENUE plan. As covered here before there are a lot of different business models for hardware devices, but they include a lot of efforts and maintenance. He and the other panelists, including SkyBell, were quick to highlight the need for security, quality firmware, robust hardware, and on-going support and they all noted how much each of those things can cut into margins.

What are LA Investors Looking For?

A tech gathering would not be complete without a panelist of investors. TechWeekLA was sure to cover that, sprinkling corporate development teams into relevant discussions and also highlighting the LA investing scene in a discussion entitled “Following the Money in LA Startups”.

Each of the three panelists represented an angel group or VC that was involved in the LA scene. One of them, Sonya Sepahban, represented the Michigan Angel Fund, but herself lives in the Los Angeles area. Though she echoed what others stated about the ability of the greater LA scene to provide support ranging from engineering to distribution and marketing, she also highlighted a few keys in her decision making.

Why do you need money NOW? She advised founders to ask themselves if they can delay funding or progress the technology or business without outside capital. If the answer is yes then typically it means she will wait. As an investor of course that reduces the risk but it also gives her longer to understand the team and what they can do.

Why do you need MY money? The concept of taking smart money goes two ways. Sure money in the bank is great, but Sonya noted that she and other angels not only want a return but, effectively, want something to do. They want to be able to provide more than just cash but also access, advice, and connections that can help leverage that capital.

Each of the other panelists echoed similar sentiments to help give back in ways other than just money. This might explain why they were on stage in the first place, not only to drum up a bit of deal flow from the audience, but also to help share a bit of what they have learned. Ultimately TechWeekLA was seeking to foster collaboration and encourage growth to help drive business and technologies forward. In that regards the open atmosphere and eager conversations in the room suggested that they were accomplishing their goals.