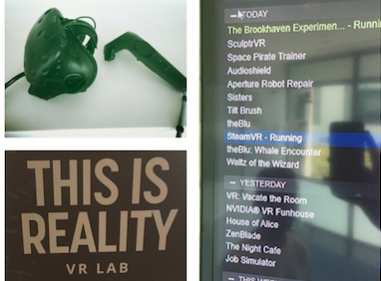 Virtual Reality is in the news everywhere but the setup required to really experience it is still rather pricey. So, when I was offered the opportunity to experience a full demo put on by AREA 51, the internal incubator of AOL, I jumped at the opportunity. The demo is a roadshow that is traveling to the various offices allowing developers, editors, sales people, and other employees and partners the chance to step into a number of different experiences. As a “friend of the organization” I was given a slot to poke around, since surprisingly not all the appointments were booked.

My host for the day, Matt, had prepped me only with the question, “What are your biggest fears?” It seems he gets a kick out of pushing peoples comfort levels inside the rig. For me that’s jump cuts, loud noises, scary faces, sudden movements that come out of no where, especially in dark spaces. Matt said he may have something for me, and though it was primarily caused by my own inability to master a swarm of zombies, and The BrookHaven Experiment delivered.

The other request I had, as a trained mechanical engineer and product developer, was a space to create things. Even before putting on the headset I was inquiring if I could walk around a home depot, grabbing materials and putting things together. Still better would have been a full machine shop with all the virtual tools to cut steel, melt plastics, wire electronics, and generally make things. Aperture Robot repair was the closest to this experience and opened my eyes to how much potential there is for engineering education and design once the VR rigs are combined with CAD systems and the pre-built knowledge of how things attach, detach, and can be deformed. I want to do prototyping of physical products in VR and firmly believe that in the design and engineering softwares of today will soon be moving to virtual reality where the interaction with designs is much more immersive and intuitive than on a desktop.

Anyways, I strapped on the HTC Vive headset, loaded up StreamVR and let Matt direct me into some of his preferred worlds. Here is a rundown of each of the environments of my reality.

If I could go back I would never have left this app. The Tilt Brush was an amazing creation tool where you could build things in three dimensional space, walk around them, and even teleport away to stand back and admire your creation. My attempt at a dune buggy was rather rudimentary but it got the point across and the small crowd of watchers was able to figure out what I was building rather quickly. The tilt brush had some limitations in selecting brushes but I’m sure a more thorough review would reveal shortcuts and motion effects that would skip the menu scrolling and spinning. If I wind up buying a VR system I’m very likely to go with the HTC Vive simply for access to this app.

The first “game” that I got to play in VR was Audioshield. My intro to it was “It’s like guitar hero or dance dance revolution” to which my response was “You’re assuming that I play those” (I haven’t for more than 5 minute demos). Still the game play was very intuitive. Each hand is a “shield” that scores points by catching different colors as they fly at you to the beat of a song. Most of the song options were some form of house music or disco remix, though I’m told there are a few pop songs and Taylor Swift pieces in the mix. I had a great time with this and was so immersed in the experience I didn’t even have time to feel self conscious about how I looked. Needlessly to say you do appear a bit silly while strapped in. Here’s my requisite video as proof.

Sold to me as “space invaders for VR” this was a simple yet engaging game that did a good job of tying together simple movement for grabbing a shield (reach over your should and when you pull your hand back, presto!) and firing a weapon with a steady stream of robot aliens.

Set in an industrial warehouse of sorts there was minimal interaction to this demo. Really it was there to showcase the design and rendering capabilities, at least as far as I can tell. Still this was the single most intriguing world in terms of the potential applications. The highlight of the demo, which is about 3-4 minutes long, was when the robot that walked into the space suddenly expanded into a classic exploded view. Every piece of the ‘bot and how it went together was right there in front of me, I could spin it, walk around it and examine each in detail. The applications for teaching mechanical design are stunning and having a VR setup with access to a classic mechanical computer aided design package, like Solidworks, Onshape or Autodesk Fusion 360, would have fundamentally changed how I first learned engineering in college and beyond.

Creepy dolls that talk, a dark room, thunder and lightning, no thanks. The only upside of this eerie setting was it’s predicability. As soon as I saw the doll passively sitting in the corner I new something was up. I’ll spare any spoilers, as it was a good opportunity to scare pretty much anyone, but I will say at least it didn’t last too long. I have a sneaking suspicion that a bunch of VR “haunted houses” will pop up around October of this year. I will NOT be going to any of them. 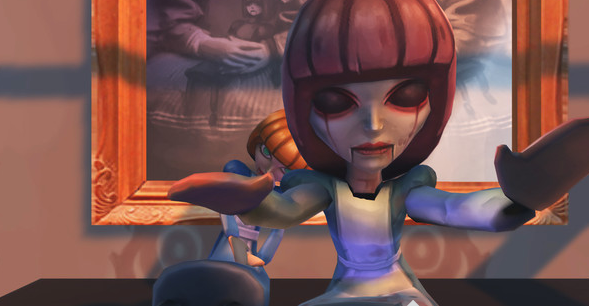 Similar to Tilt Brush but with more of a mine craft overlay, SculptVR is a great creative tool. The pallette of brushes and tools was underwhelming, but what it lacked in menu options was made up for in sheer simplicity. Turns out this is a multi-player environment and though I did not get the chance to interact with anyone it makes sense how two collaborators could share the space and spend hours creating and destroying features. The missile feature to remove material was oddly fun.

This world is an underwater world. The the deep sea version has some suspense to it, I got a bit of a thrill poking my flashlight under logs and into crevases of a reef, but ultimately it is a sight seeing trip. I did ask if there was a shark attack version, I’ve touched a great white in the wild and am a bit of a thrill seeker, but unfortunately there were none.

theBlu has a couple of settings including the reef and deep sea, but the two that stood out were the jellyfish (I could interact with them by bopping them on the head) and the Whale Encounter for it’s use of scale. I have only ever seen a whale from the top side of a boat and know that they are rare even if I did get back into SCUBA, so this was a very unique way to experience something I am unlikely to have the opportunity to see in real life.

Stepping off a cliff. It was one of the main experiences I was warned about before putting on the headset and the reason I had to sign a waiver. It turns out someone else took the stepping off a cliff thing a bit too far, fell over, and wound up taking out a nice headset and the computer it was tethered too. The scene was shot in 360 from an actual cliff, supposedly somewhere in Australia. The rock face I was on was built out so that there was something provide the up close perspective, and stepping off of it did immediately send my mind off in a few directions trying to process exactly what was happening. I have dreams of combining VR, a big empty warehouse, a foam pit, and a gameshow style spring board. There does appear to be versions of this with haptic feedback the replicate actually climbing, but that was out of the question for the demo.

This was the shortest lived of the worlds I stepped into. It’s a play on a wizard lab, complete with potions and spells and all sorts of fun. This seems like an interesting application but I prefer the other creator items, like the brush and labs, and since I was approaching an hour in the system I figured it was time to jump to the next thing.

This is a first person shooter game and ultimately the one that pushed my limits. Supposedly the game was designed in about two weeks, but if that’s true the developers deserve respect as it stands up well as an introduction to VR. You basically stand in the center of a dimly lit street while monster walk/run at you from all around. The pistol in your hand is highly accurate, which means that hitting monsters at a distance is pretty tough and I wound up letting them get close so as not to waste ammo. Eventually I spun around to realize two of them were right on top of me. I wish I was wearing a heart rate monitor, the fear was just the same feeling as being in a well run haunted house in October. Not my idea of “fun” but wow, what an experience.

There is no end game to Brookhaven Experiment (at least not that I ever got to), just an endless stream of firing at Zombies, and rather than spending hours playing a first person shooter in a side conference room of an office building I decided to end my session. When I pulled the headset off I was seating slightly where it had been pressed against my head, and had to sit down for a minute. Though I never felt sick while in the VR, for about 2-3 minutes after pulling the headset off I didn’t feel right walking around but things readjusted fairly quickly.

Thoughts From An Hour of VR

Overall I spent about 75 minutes in VR and while some of that was loading and restarts because I tripped over cords, for the most part it was completely interactive. Even the times where I was just looking at something the ability to spin around, duck, and look under things made it really feel like there was a reality there.

There are other worlds and experiences that I didn’t see, the most intriguing of which are the VR journalism companies like Emblematic Group and Immersive Journalism both of which cover things intense subjects like the Syrian war. Ikea has a VR experience that lets you see the placement of furniture in your home, which might be the closest thing yet to my goal of seeing a hardware store and machine shop in VR. As soon as I find that experience a follow up is sure to come.