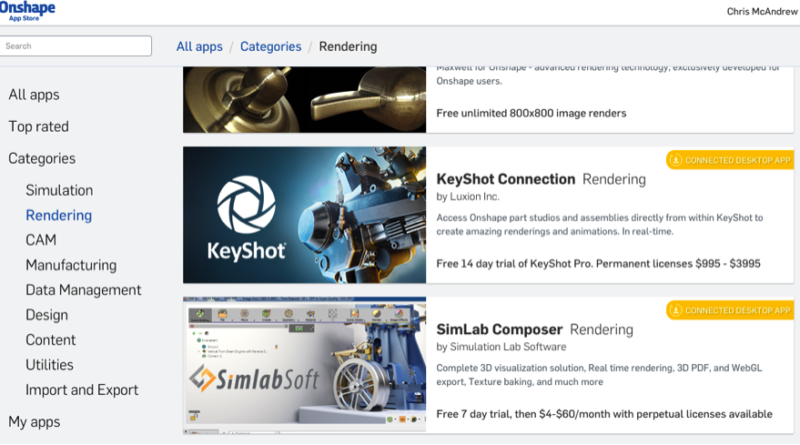 Onshape is the youngest of the MCAD system’s we are looking at but even at their initial launch they already had 27 plugins available and that list has expanded since then. I spoke with Darren Henry, Director or Marketing for Onshape, and Cody Armstrong, regarding the growing eco-system of Onshape Add-ons and the nuances of working with partners to take advantage of their cloud based system. They currently list more than 70 partners that have access to their APIs or otherwise are working to integrate Onshape or expand the capabilities. The partner program, as Darren Henry states is easy to get setup with, being a partner means, in his words “They signed a partnership agreement with us. They get the product ready, we help QA it, and then we put it up on the app store”. By far the eco system around Onshape is the smallest of the three MCAD systems this article looks at but that is to be expected given that they have only been around just over a year. Just last week they announced FeatureScript, covered below, which is just one of the ways they plan to grow that ecosystem.

Developing for the cloud app has some differences but overall is fairly straightforward. Henry points out “If I’m a desktop developed, I’ve never worked with OAuth. It’s an authentication software (that ensures data integrity), it’s a learning curve to working with a web based app.” But the network of developers down played any complexity. Josh Mings, Director of Marketing for Keyshot, which has add-ons for Onshape, Fusion and Solidworks notes “Our development team is knowledgeable of what is needed for web-based support. Even though the KeyShot Connection for Onshape isn’t browser-based, KeyShot still has the tightest connection with Onshape,” Keyshot is a connected desktop application for Onshape but there are actually three versions of add-ins that connect to the cloud data in different ways. 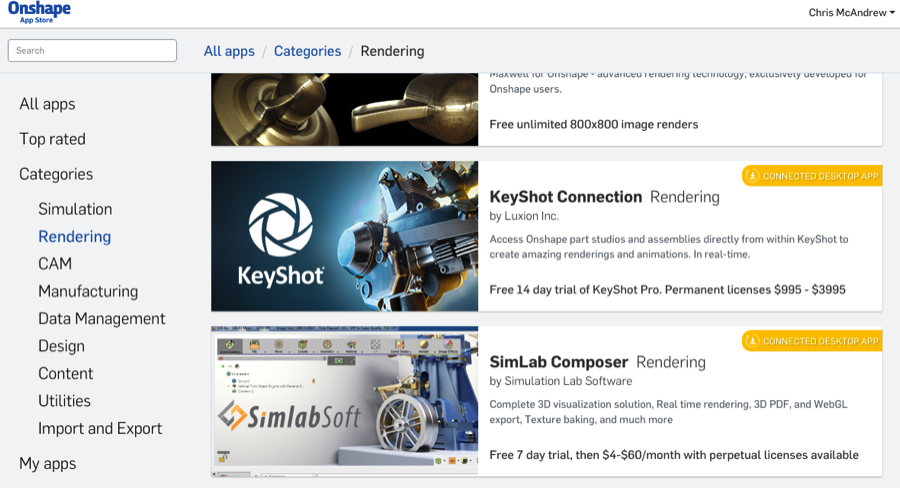 The add-ons fall into three categories:

There are also hardware partners to consider. 3D Connection, who manufactures 3d controllers preferred by many designers, had some minor hurdles to clear before launching integration with Onshape. States Henry “We made sure their drivers worked with our software. They didn’t have a browser based driver, that’s been a huge success”

One example of a partner taking advantage of the cloud system is SimScale. SimScale is a simulation platform that closely resembles Onshape’s business in that their software is completely cloud based. Pricing for SimScale also follows the SaaS model, with monthly fees for paid version starting at $170/month, a far cry from the $10,000+ cost of perpetual licenses of competitive systems. They also offer a free version, with limited processing hours that I used quickly to test the flow. SimScale is a connected cloud app that can fetch data directly from OnShape. Setup of an account was handled separately but one I got in there is an immediate “import from OnShape” button that allows you to fetch files from OnShape. For anyone who has every waited minutes, or hours, for a simulation to run, the opportunity to leverage the hardware resources of a remote cloud is a welcome one.

The SimScale cloud simulation tool connects directly to Onshape to grab files. Each platform requires an independent login, but once signed in the importing is seamless and extends the MCAD capability to full simulation.

More is expected to come with Onshape partners, as it is with their core functionality. Unlike traditional CAD packages, such as Solidworks that updates annually, Onshape’s updates schedule follows an agile methodology. Cody Armstrong highlighted ““We update every 3 weeks… everyone on the planet is on the exact same version”. Both Henry and Armstrong were also excited about the pending release of FeatureScript, which is effectively a release of the source code for Onshape. “Feature script allows people to build integrated features and share them, either to be monetized or shared” claims Henry. It is important to note this is not for the casual user. In releasing FeatureScript the Onshape team is releasing their source code. The thinking is that if a user wants to customize a feature that is unique to their needs, rather than starting from scratch they can use an existing feature as a jumping off point. 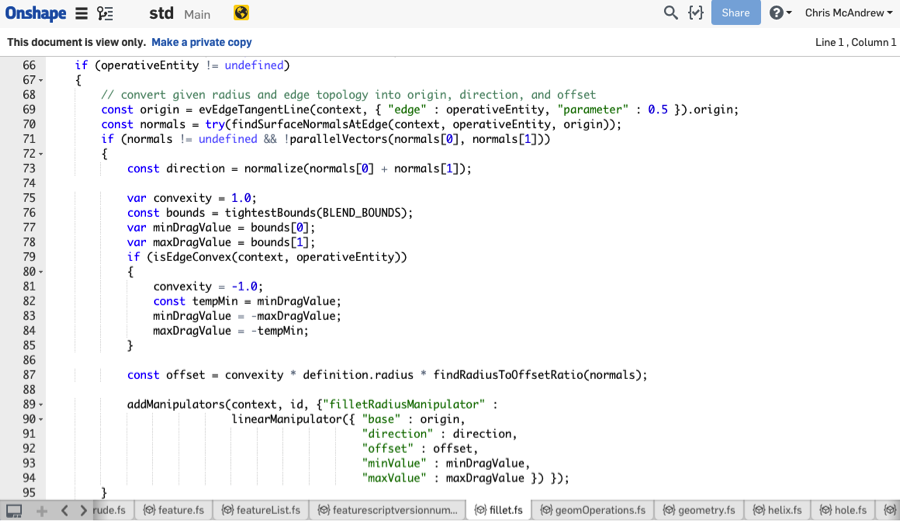 OnShape’s FeatureScript is a complete peel back on their source code. Here is part of the code for a “Fillet” feature. By giving users access to the underlying program code they avoid making Macros and instead integrate the customization directly.

With access available across devices, especially phones and tablets where the creation process is still cumbersome, I am intrigued to see if this openness will bring on a better mobile design experience. When I asked Darren Henry noted the high prevalence of mobile usage “Roughly one in 6 sessions is on a mobile device, and the majority of those including editing data”. A 17% usage via mobile (1 in 6) is not that much compared to overall web traffic but a shift to designing on an array of devices only serves to expand the market of potential designers and engineers. It is only with the removal of local hardware needs that this is possible but it is not unthinkable that someday even a beginner with a basic web browser and connection will have access to a suite of tools that used to be reserved only for well funded professionals.

Read more about the growing eco-system of CAD system add-ons.

One thought on “Onshape’s Growing Community of Partners”